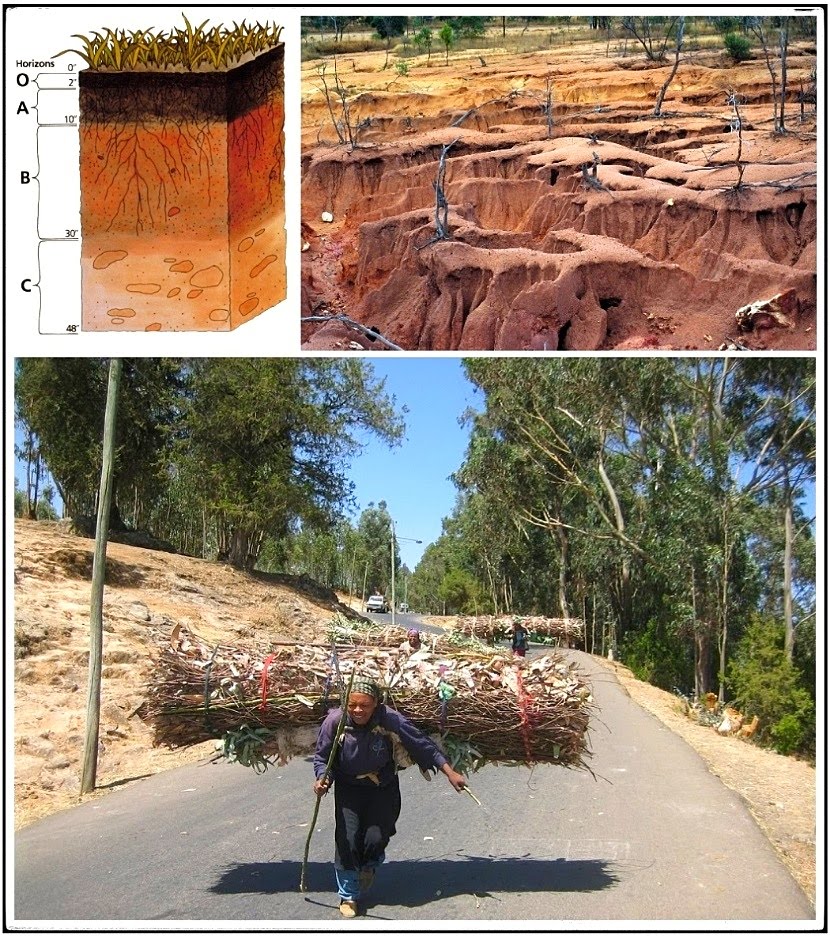 
On the Entoto mountain and many other places around Addis Ababa, the existing vegetation is Eucalyptus globulus. This is an Australian tree brought to Ethiopia some 100 years ago. At this past time, most of the area around the town had been deforested due to the need for wood construction and fuel.

The introduction of the new species was very successful, as its speed of growing surpassed the indigenous trees. Some of the Eucalyptus on Entoto have their origin in that first phase of reforestation, but plantations continued during the last century.

At present, the bulk of the Park area is covered by eucalyptus plantations. The new species is an integral part of the Ethiopian history, but at the same time, it is a tree that not belongs to the Ethiopian flora.

Biodiversity:  Foreign trees often have difficulties in adjusting to their new environment. The Eucalyptus is growing apparently without trouble, but it is not capable of sexually reproducing itself, i.e. the seeds do not germinate in the Ethiopian soils. Therefore the standard procedure of introduction is the planting of seedlings.

The young trees soon start to compete very efficiently with other vegetation. It is a fast grower, easily reaching above other trees and suppressing them. At the same time, a chemical component in the leaves and roots prevents the growth of both other trees and herbs. This leads to a monoculture with Eucalyptus as the only tree species and eventually no ground cover at all.

The Eucalyptus demands large quantities of water. Areas which earlier were periodically wet and with a flora adjusted to such conditions, get drained by planted Eucalyptus. Because of the poor flora and the lack of plants needed by specialized insect and birds, the biodiversity of a eucalyptus plantation is extremely low. Also, when timber is continuously being taken out of the area without no input of fertilizer, the soil quality gradually decreases, reducing the possibilities of the reintroduction of indigenous species.

The Importance of Domestic Roots Against Erosion.

Erosion: Because there is no ground cover, the only thing to hold the soil is the web of roots of the trees. The soil-holding capacity of Eucalyptus is very moderate compared with the trees initially covering the slopes of Entoto. This causes severe erosion, easily observed in the water running through Addis in connection with the rainy seasons. For every rain period, the layer of fertile soil gets thinner. If nothing is done now, in a couple of years, there will be nothing left for new vegetation, and the erosion will be irreversible.

Flooding:  On Entoto, every leaf and every branch have fallen to the ground is collected by people, whereas in a natural forest, organic material from leaves, wood, roots etc. is left to be decomposed in the soil. The organic matter improves the soil structure, leading to a higher infiltration rate and a much better water-storage capacity.

Even if the Eucalyptus is a tree with very high water consumption, the total amount of water taken up by the vegetation is probably higher in a juniper forest, as the total biomass is more significant abundant. The entire surface of leaves, needles, branches etc. should also be much larger, with increasing the amount of precipitation returned to the atmosphere by evaporation.

As the water catchment of the eucalyptus plantation is very low, it cannot counterbalance the uneven distribution of rain. The result is flooding in the downslope areas, in this case, the northern district of Addis. In August 1994, three people were drowned because of such flooding.


Land Use: The bulk of the area is used as a plantation. Eucalyptus has been grown for a long time, mainly for the production of construction wood. Fallen branches for fuelwood are collected by people living in the area, as well as outsiders.
Some females are actually sweeping the ground for some single twigs. Lately, the illegal cutting of trees has accelerated, large amounts of timber being brought out.

The regular land use on this kind of soil would be cattle raising and mixed farming (Foth 1984), and this can still be seen to some extent. One part in the upper eastern part and another in the western is used for crops and cattle breeding.

Where the Eucalyptus has not yet ruined the ground vegetation cover, sheep are brought for grazing. There are fenced pastures for the animals, but instead, they are guarded by shepherds. Inside the proposed park area there are about 60 households.

Already today, visitors come to Entoto for recreation purposes, as it is the only forest-like area in the vicinity of the city, and because of the beautiful views from the mountain.


The Australian Eucalyptus Tree and its Ancient Legacy.

There is also an area in southeast containing junipers, but these are facing a significant threat from fuelwood collectors. On the steep hillsides and in the gorges and gullies in the lower part, there still remain trees of indigenous species like Juniperus procera, Podocarpus gracilior, Dovyalis abyssinica, Olea europea var, Africana, and Ficus sp.

A few solitary indigenous trees stand in open areas, e.g. Hagenia abyssinica and Hypericum sp. In the upper eastern part, there are beautiful meadows with a high diversity of herbs, and several species can also be found along the brooks.
(Håkan Blanck and Pia Englund, Entoto Natural Park 1995).

Although regarding the eucalyptus plantation in Ethiopia, this tree follows by very high water consumption,  and this while the total water amount of water taken not deliver enough of this water to the surroundings or deep aquifers and then regarding the specific Ethiopian biotope. The Australian Eucalyptus requires this water for its secondary survival strategy but a foreign organism to the Ethiopian highland, within an incompatible evolutionary soil and type of nature. This eucalyptus tree uses this water to its biomass but regarding the Ethiopian biotope not effectively distributing this water to the environment and neither to Ethiopia's natural groundwater reservoirs.  In Ethiopia, this eucalyptus tree is incompatible to the type of biotope in the planted surroundings, which furthermore is very scientifically evident and contrary to the distinctly higher level of soil accumulated and distributed water of the native Juniper forest. This phenomenon of naturally accumulated water occurs in the indigenous Juniper forest thanks to this native tree's effect of securing healthy topsoil and web of strengthening undergrowth.