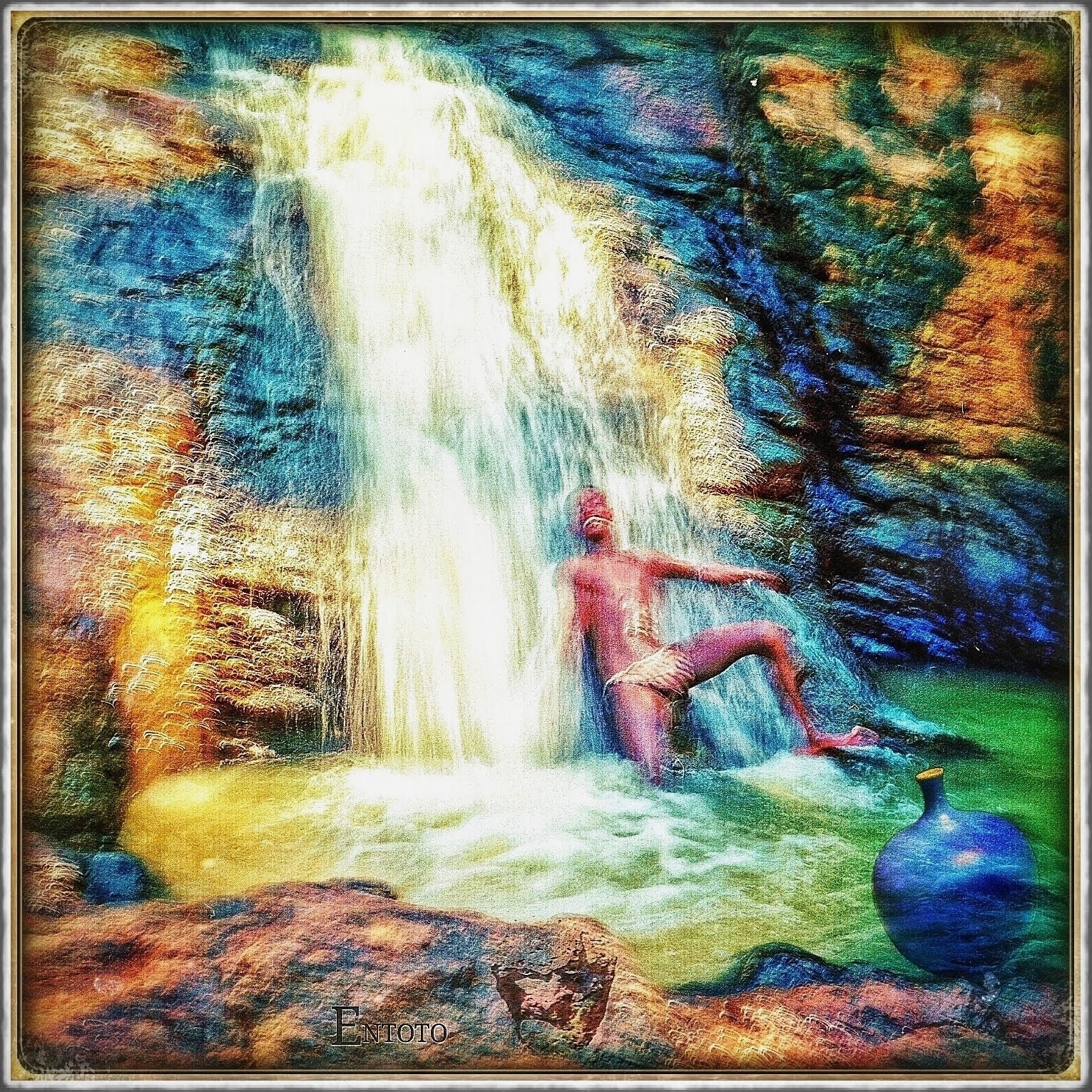 "Entoto's climate during the rainy season was far from pleasant, for it suffered from many storms. A French traveller, Jules Borelli, states that it was a place of much lightning, thunder and fog, while his compatriot, Charles Michel, remarked that, ''exposed to the wind, difficult of access, and without drinking water'' (Ibid, p.103).
(Håkan Blanck and Pia Englund, Entoto Natural Park 1995).

The Picture of the Waterfall

The Concealed Vault Above the Abyss

Description of the Picture.

Regarding the picture above: The outlet for Bees Cliff's actual Waterfall (14) and its abyss is just some metres behind but still concealed by this opposite camera view of the smaller and cosy Waterfall in the photo. However, the tiny bath and Waterfall in the image above is a concealed rock vault, and its location is high above the abyss and extremely dangerous during high water flow.
Sculptural Formations Above the Abyss.
With this dramatic creation of a secret rock chamber and cliff-hanger chasm: the picture just to the left is staggering, inviting, and mysteriously hidden. However, people with sensitivity to heights should not climb into this mountain vault without being double secured with harnesses and other equipment.

The oncoming rainstorms are evident in their alert approaching onslaught on Entoto mountain massif, which is visible and apparent in severe thunderstorms. This obvious fact of approaching the rainy weather usually gives time to seek out one of the high-lying communities and their service amenities. However, these rainstorms on the mountain massif can be very persistent and thus make it impossible to expect an interruption of the rainstorm before dusk, making mountain hiking nearly impossible. Under these circumstances, it may be appropriate not to wait for a very uncertain clarification of the weather but instead take one of the waiting taxis or buses to get home before the dark. For the more adventurous who prefer to face the storm in the wilderness of the Park, some severe precautions prevail. Due to these rainstorms can be very powerful, precautions follow all types of stay near the river banks, which express their danger in indicatory warnings by the gorges' classical formations. These beautifully sculptural formations reveal the gorge's historic high water flow and give signs during thunderstorms to avoid these dangerous water imprints with the highest priority. This fact of the inexorably savage forces of the water should therefore cause unhappily surprised or exposed hikers to immediately seek out higher ground above the ruthless water flow of the gorges.

The photographs and their environment.

These photos of water-filled streams and cascading waterfalls are shot just above Bees' Cliff (14) at Entoto's southern highland plateau - from early October to the beginning of November. All of these active water sports photographs passed about one to two months since the long rain season ended. Bees' Cliff 14 requires caution in the canyon but assisting by the wide map loop surrounding the gentle and fascinating points 36 and 41-42
Despite the period passed from these photo opportunities and the last rains being over a month, it is still a great asset of bath and fresh spring water flow on the higher ground of Entoto. But maybe for those some hilarious adventures, it would have been even more suitable if they had occurred a month earlier and thus offered even more enjoyable spontaneous bath activities.