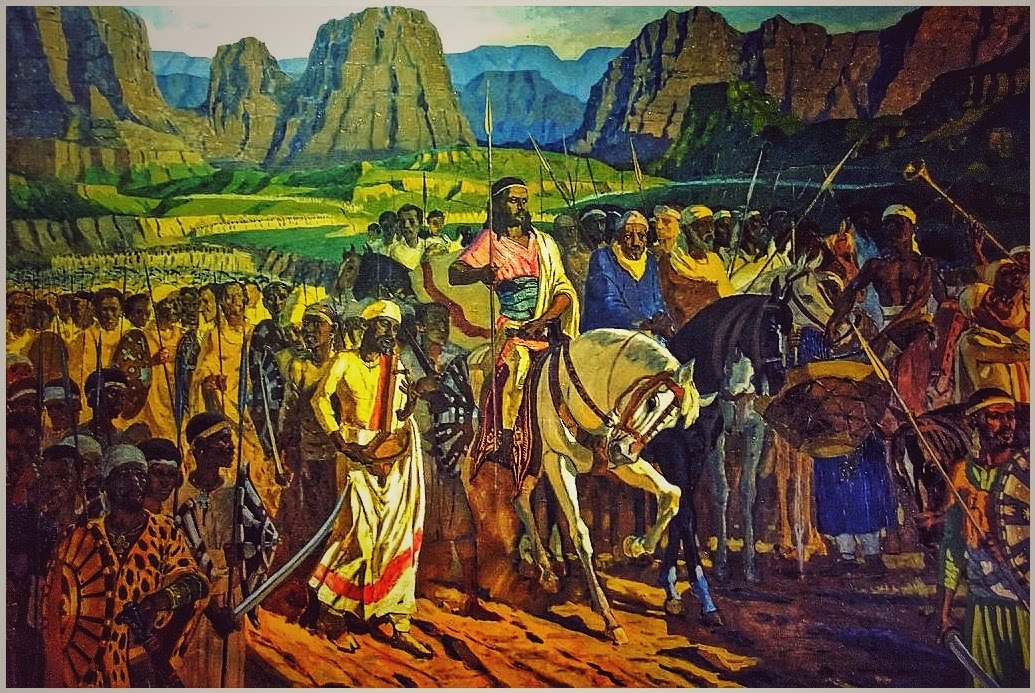 CAUTION: Use the Camera with

CAUTION: Dramatic Distances and High Altitudes.
Besides, Entoto Kidane Meret Sanctuary (32), with its Church and Monastery, is astonishing hidden, tucked into the mountain massif's rising shoulder, dizzying perception arises very soon, and demands care for young families. This observance is evident because dramatical views display spectacularly beautiful landscapes over the location of gorges, precipices and gullies.
Demanded Harness in Contact with Abyss.
These unique impressions give a somewhat hazardous situation with confusing camera handling and keeping the feet away from the abyss. The importance of security precautions occurs rather immediately when you move away from a bit of piece of this cosy Entoto Kidane Mehret (1) mountain town and Sanctuary (32).

[CAUTION] - A Mountain of Ordeals.

Note that the mountain massif is vast, and the family on an excursion should avoid the tiring adventures tours beyond the line of sight over the landscape of the mountain range. This caution observance in the family's daily route regards the family's well-being and pleasure due to the demanding terrain. Therefore, Do Not Combine the family today's new mountain adventure on the same day with tiring and exhausting fluttering trips between Entoto Kidane Mehret (1) and Entoto Park (Z), including Entoto Maryam 43. This caution is crucial because the impressions from each place are just at the upper limits of what a person can muster.

Qualifications, Care and Caution.
The precautions are necessary as the hiking trails are either exceptionally varied or dramatic in their diversity propagation up to Entoto's high plateau. No concealed walk in the dry creek bed should be done without company, depending on the possible risk of injury, fatigue, or heart fragility. Still, at least one more person requires this type of concealed seasonal hiking. At least two litres of water per person in unbreakable bottles is a minimum for these Highlands adventures to Bees' Cliff (14).

Caution During the Rainy Season.
However, provided that the trekking not is made during rainy periods, the long stretches of tributary river banks (35) - (B) - (14) also offer a lot of relaxation and enjoyment. Significantly, nature drama dominates after the path deviates and continues upward just before the old pipeline joins the reservoir of the Italian fortification (38) - (B) at the river (35).

Very Clear Restrictions for Further Hiking Above (36) and Towards (14)

Through a deceiving natural trickery, the eastern canyon's slope between points (36) and (14) gives an impression of invitingly lush beauty but a treacherous one with a fertile green breathtaking threshold, hiding a shocking void. Anyway, the safety boundary of the continuous path along the river's shoreline (35) gives a clear indication that this route does not include Bees' Cliff (14) as it visibly is too steep and directly dangerous except for possible experts with safety harnesses and other equipment. This danger appears thus with clarity when walking along this river's shoreline (35). It requires only a short walk back to reach the trails on the eastern slopes of the riverbank with the gentle terrain along the tributary gorge (36), located within the lower part of the map loop (14).

Since all streams around Entoto run up within a short distance to the highest part of the plateau, there is no risk of being surprised by far and accumulated sudden river flow from an unknown range. There is no known weakness in the deep rock pools that could constitute a magazine water mass just waiting to break through a weak point in the cliff bottom. However, no person should walk on the riverbanks of the ravines in the aftermath of heavy rain as this poses an immediate danger to life. A mistake on slippery ground can be fatal despite the apparent alert about the fast water flow. This torrential force along the river banks can quickly take a person or their pet beyond rescue in a relentless power of a rushing water flow.

[CAUTION] - Hyenas, A Nocturnal Danger for the Capital's Vulnerable.

Absolute Caution with Injuries and Liquor.

Since the relationship between humans and Hyenas is ancient, a type of mutual peace has evolved. On the other hand, Hyenas have been seen as highly interested in sick or heavily intoxicated people, just regarding this as something different from humans and therefore not included in the ancient consensus of mutual respect.

Hyena:  Warning of Fatal Accidents in the Wilderness.
It would, therefore, be possible for a person who slips and lies demobilized, hidden and injured in the shady creek bed, may, at last, after a few days, attract Hyenas to become directly fatal. They can indeed become mighty animals and then, especially the females.

Precautions with Hiking and Thunderstorms

For the more adventurous who prefer to face the storm in the wilderness of the Park prevails, some severe precautions. The oncoming rainstorms are evident in their alert approaching onslaught on Entoto mountain massif due to their apparent warnings from the dark clouds of the approaching thunderstorms. This obvious fact of approaching the rainy weather usually gives time to seek out one of the high-lying communities and their service amenities. However, these rainstorms on the mountain massif can be very persistent and thus make it impossible to expect an interruption of the rainstorm before dusk, making mountain hiking nearly impossible. Under these circumstances, it may be appropriate not to wait for a very uncertain clarification of the weather but instead take one of the waiting taxis or buses to get home before the dark.

Entoto Kidane Mehret (1), Entoto Maryam (32), Entoto Park (Z).
Due to these rainstorms can be very powerful, precautions follow all types of stay near the river banks, which express their danger in indicatory warnings by the gorges' classical formations. These beautifully sculptural formations reveal the gorge's historic high water flow and give signs during thunderstorms to avoid these dangerous water imprints with the highest priority. This fact of the inexorably savage forces of the water should therefore cause unhappily surprised or exposed hikers to immediately seek out higher ground above the ruthless water flow of the gorges.

The Secure Way Back for Lost and Worried people

To find out from this enchanting and beautiful original forest (40), a lost person only ought to follow its very apparent slope down the east of the valley and thus in short contact with the open environment and clear paths that quickly show where you are in the relationship with the rest of the Park.

The Dangerous Heritage of Terror Alien and Threatening Motives Behind Evolution of Terrorism 1. It seems inevitable that Ethiopia, as an example of the grandeur and deep attraction, will cause jealousy. Therefore Ethiopia had once more to be the legendary scene for even more examples of deceived western international sources, tragically deluded by insidiously fabricated alliances with their specific plague of historical records. The probable reasons for these international deceived emotions derive from the flagrant background of a compulsively regular duped global media, tragically supporting a terror classed organization that previously forced its fabricated government on Ethiopia's population and environment. Thus, the deluded international media unintentionally delivered the challenge and stimulus for any Ethiopian to further raise Ethiopia's desire for cultural sophistication and technological progress. These previous terror govern, and naively manipulative elements again
Read more