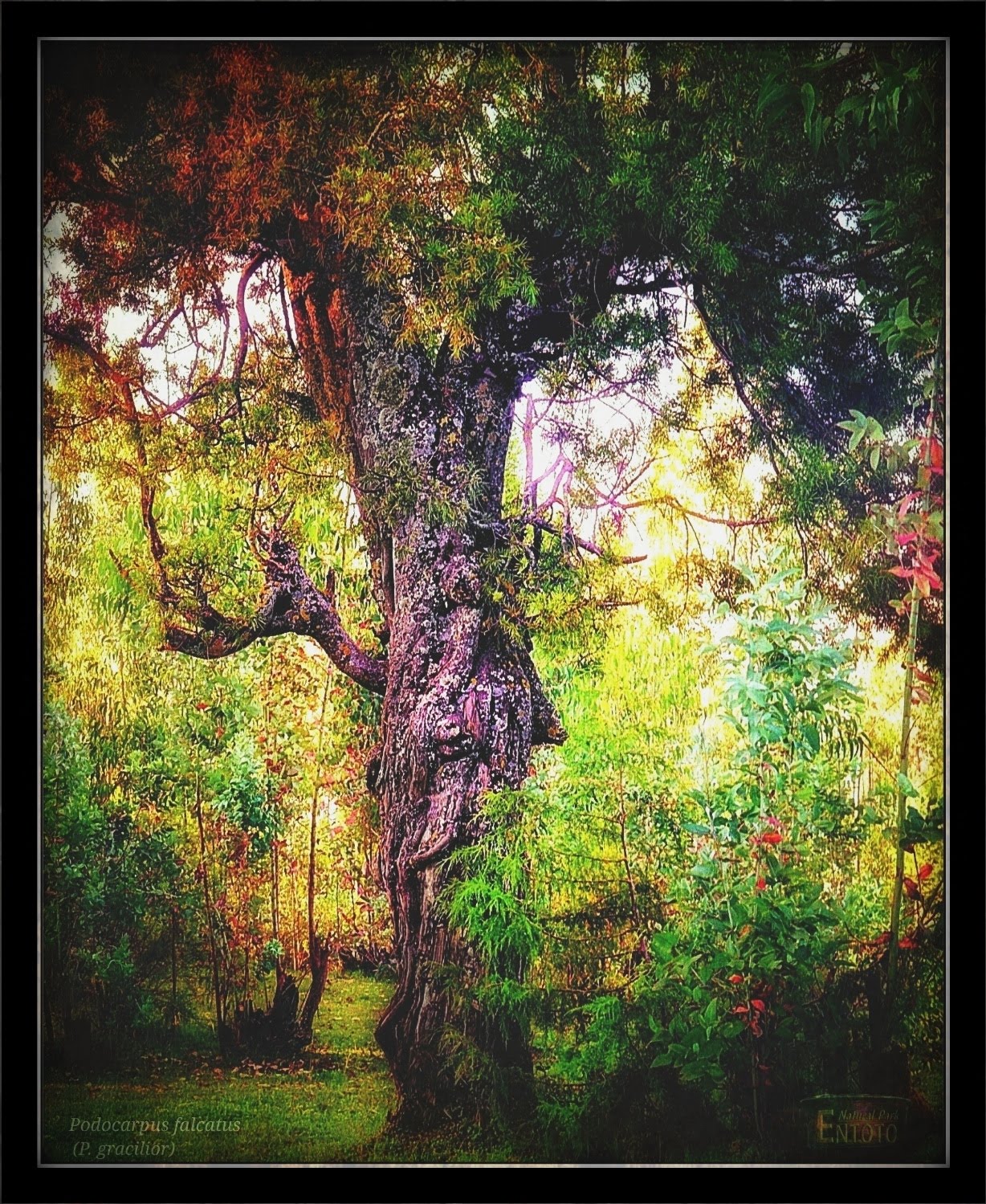 Ecology:
Podocarpus trees are mainly found in the southern hemisphere. These conifers which have no cones are related to junipers and are also known as yellow-woods. P. falcatus is a large tree of the semi-humid lower highland forest of the central and eastern Highlands in Moist and Wet Weyna Dega and Dega agroclimatic zones, 1,600-2,500 m.

Remarks:         The species is now rare due to over-exploitation. The wood needs preservatives and careful seasoning to prevent warping (Azene Bekele-Tesemma 1993). 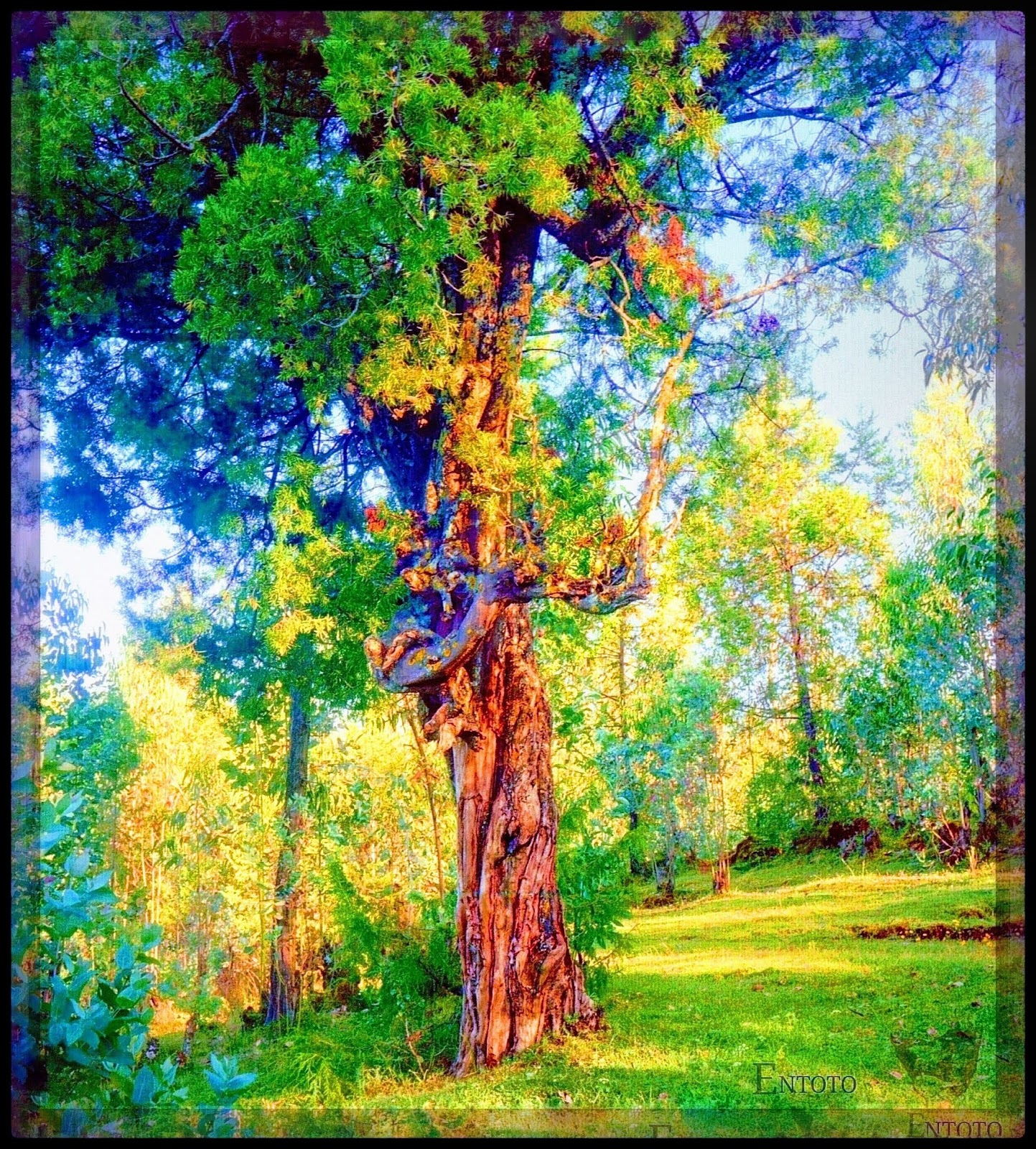 These pictures show native Podocarpus trees, very near the wild meadow with the farmhouse (39).

Some Podocarpus trees,  found from a much previous era, appears admirably muscular furrowed around the extensive farmhouse area (39)  just below point  (16) which are a great pleasure for any soul with the passion for nature. Just here above is the farmhouse (39) with large Juniperus procera trees along its upper hillside. Furthermore, upwards the path turns slightly to the right towards the location  (16), just at the high plateau's outer edge and even here with many incredible stately Juniper trees. 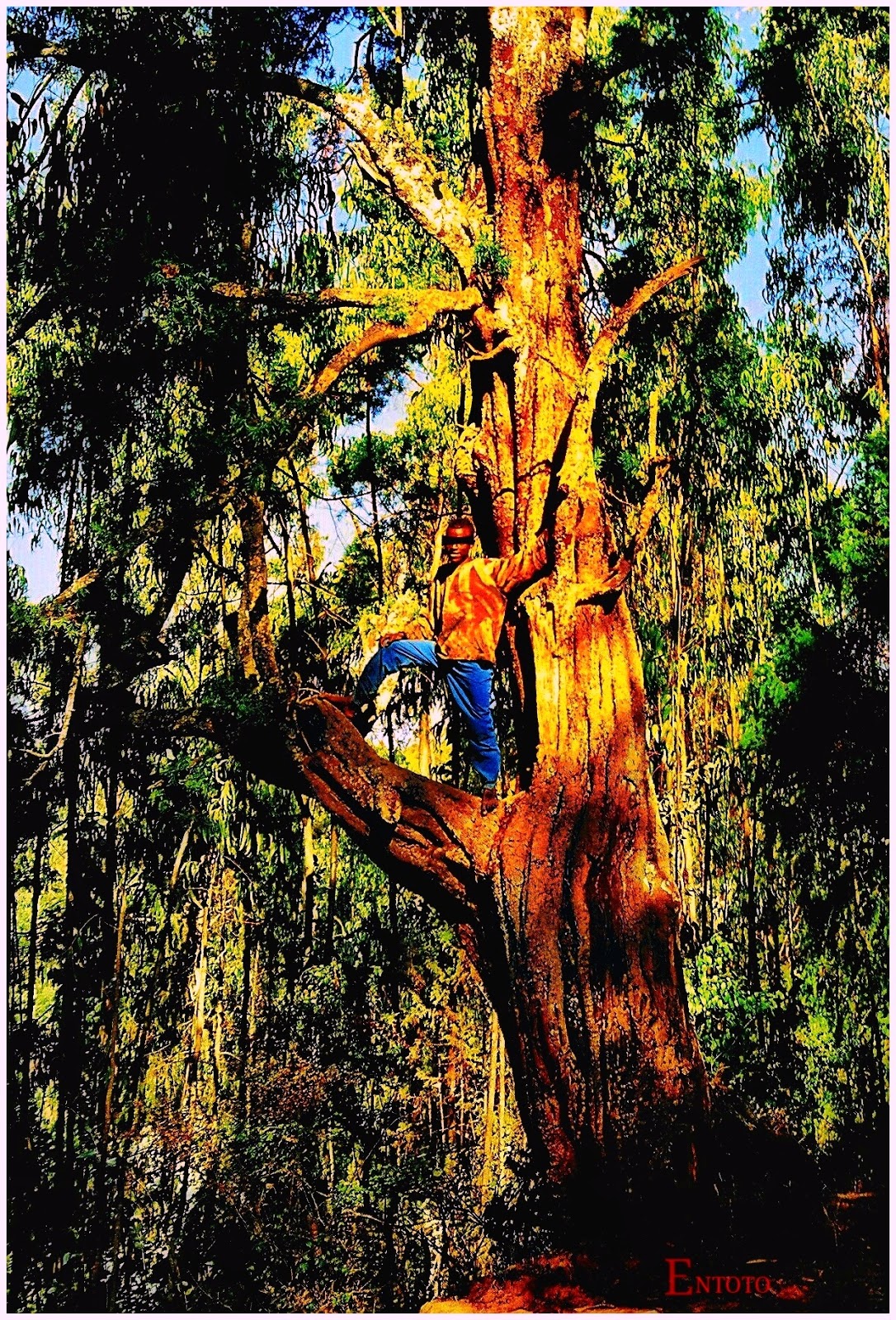 The relationship between the Indigenous trees and their unique appearance.

The fact that this tree is related to Juniper appears with clarity, and it is in this context that difficulties arise with the seed's vulnerability. The seed of the Podocarpus tree and its stem is considerably longer than the corresponding comparison with the Juniper tree seed and hence higher and more vulnerable to climates and grazing animals. Because the two related species have the same peculiarity to lift their seeds up from the ground to the height of their crisp stalk, an unprecedented vulnerability arises. This vulnerability with an exposed uplifted grain applies in particular to the Podocarpus tree as this species makes this seed presented with utmost sensibility and thus becomes an immediate victim on a hard and away offensive clay-soil crust.

This tree is scarce at Entoto these days and does not appear to be able to compete with the eucalyptus planted surroundings. It seems that it is no longer possible to give surviving progeny in the barren, eroded exposed lands that have been formed since the introduction of the alien eucalyptus tree over a hundred years ago. (Podocarpus Tree with Plants Map)

However, a lot of work has been done to re-form an upper soil layer with a protective undergrowth. It would, therefore, be a very significant surprise with information about a new generation of this highly-blessed historic tree, which, however, still grows in a magical graceful and appealing landscape.

This tree has an exposed and sensitive seed-laying design that is quite the opposite to its otherwise healthy rugged seed coat, including their fruit (cones). Here its nut-like dry last year's pendants decorate the mighty and powerful mother trees with its seed (cones) in ancient-looking packagings that surround and protect the very fertile seed and provides inspiring, sophisticated memories from last year's season.


Podocarpus Trees Next to the Paths in Circle (B)

The intended direction indicator allows a method to be used here with limited length in the intended dial and with this method also possible to distinguish objects more centrally located on the intended clockwork. Consequently, as this intended pointer reaches 60% of its full length and at four o'clock it becomes possible to find a magnificent native Podocarpus tree to the left of the hiking trail. To see several other indigenous Podocarpus trees it requires instead to look just below this field (39 ) and to the right side in the lower part of Circle (B). The easiest way to reach these trees is to use the crossroad, just outside the lower part of the circle (B), where these trees just above appear to hide deeply from a forgotten past. The intended pointer clockwork gives direction, and when its outermost tip reaches its full extent at 4:30, it points to a concealed and dense forest area just south of the field (39). This rather wild and wavy slope is a fantastic place with several native Podocarpus falcatus trees, which muscularly proudly, posing from antique on this hilly southern slope.


The Orientation and Direction Map to the location of Podocarpus falcatus trees.

The Invitation to the trees from the past, Circle (B)
The still gently upward hike shown within the Circle (B) includes the points (35), (38), (39), and constitutes both of crossroads and with them belonging somewhat wild paths. This lower area of the circle (B) also includes a significant but gentle ledge which rises some metre in the hillside and provides with a beautiful, charming elevation of the landscape.

The Canyon and its River gives direction in the Circle (B)
Two crossroads are located just to the right of the canyon and its river (35) and one them in the lower part o the circle (B). The second crossroad is located to the right, just outside the ring. However, both of these crossroads are in line with the lower part of the circle (B). The Italian fortification (38) provides here with an eastern pointing direction for the both of these crossroads. Regardless, the choice all of their following paths will soon contact the continued walk towards higher grounds.


An evolutionary legacy from an aeon of natural wealth 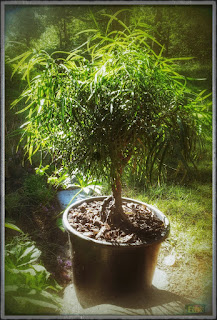 This peculiarity in seed design of setting its kernels to sprout with the high lift was developed at the beginning of these trees' era (evolution) and in epochs long before any human culture or species. Through this evolutionary prehistory, these seed stalks and kernels were naturally received with a moist typically loose and absorbing soil (humus), and a surrounding of dense protective undergrowth that could hide and shield these so tender exposed vertically raised kernel stalks.

A beautiful memory that attracts modern science and art.
With glowing passion and warmth feeling, it is still spoken among the residents of Entoto about the time when the water level a reasonable time after the rainy season still stood one metre higher in Entoto's deep streams and its enchanting nature rock baths. It is thus quite close to the time when Entoto's mountain massif and its canyons could carry significantly higher water quantity and thus supply the population in the capital with fresh water to a much greater extent.

The stalk of this seed of this tree is considerably more significant in height at an early stage of its soil germination than the equivalent of Juniper tree seed, and because they have the uniqueness of raising their seeds to the height of their brittle stems, an excellent and traditional solution arises; Rosa abyssinica. 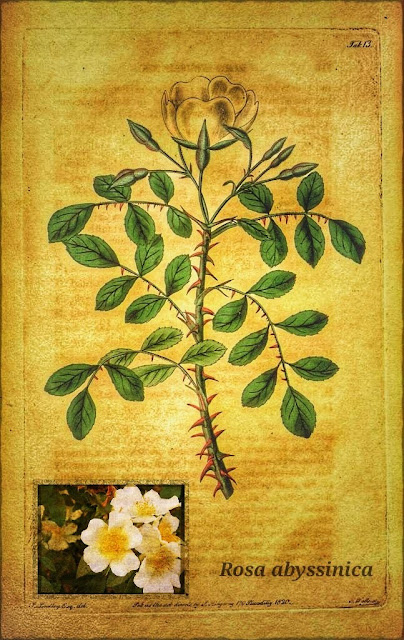