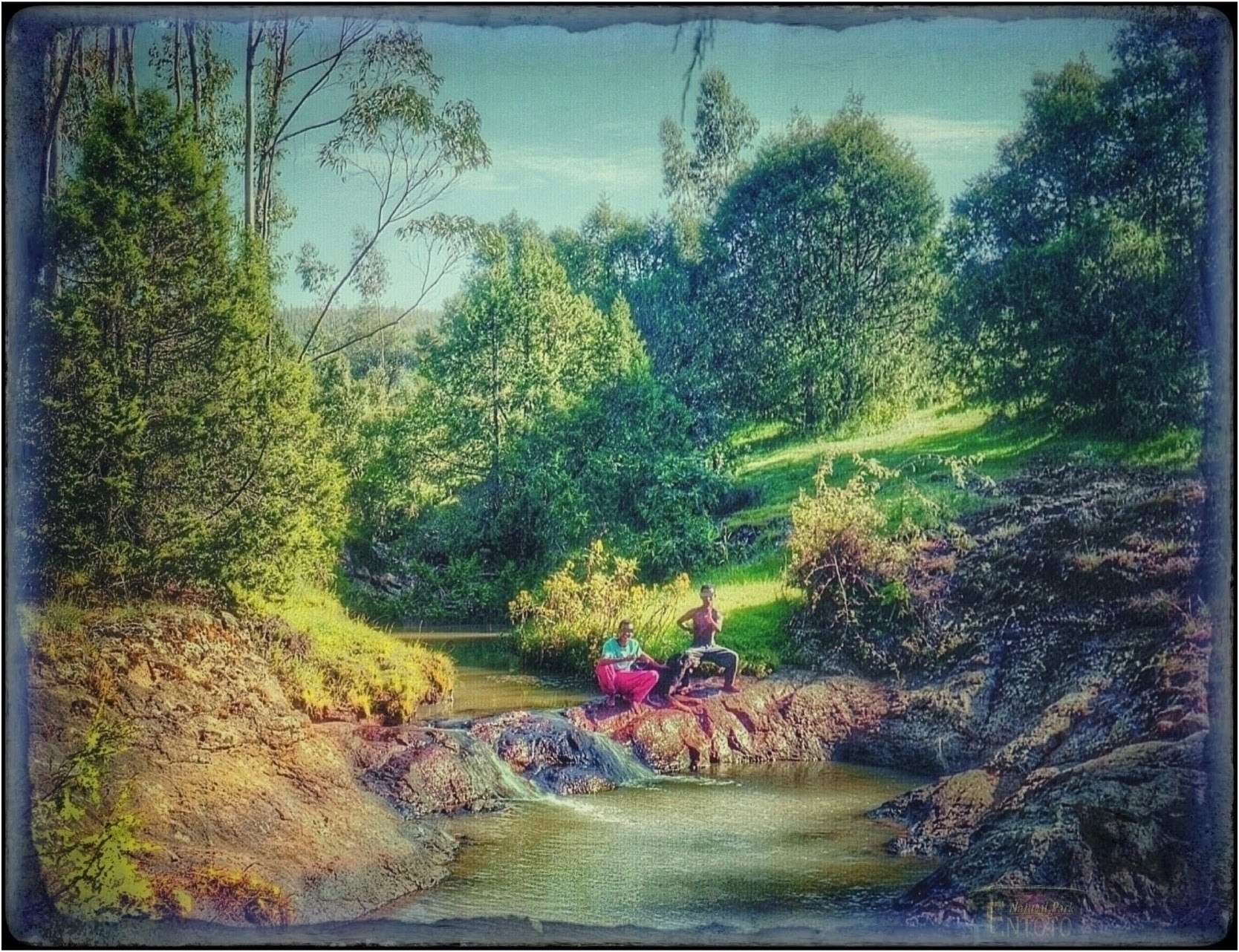 These photos were shot on the dramatic ledge of the mountain's high table a month after the last rain. Hence, the flowing freshwater from the Highland brooks in these photos was not rainwater in its origin but instead chilled and underground fresh spring water. This phenomenon of freshwater creation is simply Highlands and mountains affected by gravity, naturally downloading the torrential deluges from the rainy seasons into the natural aquifers.

Characterized by frigid nights, the average temperature of the mountain Entoto's plateau is below comfortable bathing degrees with its average temperature of about 12 ° C. Thus, the result of these long and cold nights, in turn, determines the degree of cooling effect in the mentioned natural Highland pools. However, the mountain afternoon hike is usually hot, so any refreshing bath is enticing, fun, welcoming comfortable.

While this place is unique in many ways, there are also careful reservations about the impact people can exert on its nature. Because this site contains what is desirable for people and wildlife, the result is that a conflict of interest and living space can occur. The path from point (36) is the last somewhat rugged and wild hike towards Bees'Cliff (14). The few prudent slight detours along the upper bank of the tributary creek (36) are for increased safety and to avoid suddenly scaring wildlife
A pleasant eastern route along the tributary gorge 36.
The wildlife often enjoys socializing around the beautiful pools above the plateau's threshold at the abyss of Bees' Cliff (14). Naturally, therefore, it is appreciated that visitors show interest by approaching the site carefully. However, since Bees' Cliff (14) and its abyss are close requires due care; therefore, it follows the recommendation to choose a more eastern path along the gorge (36).

The Afternoon's Warm and Inviting Cliffs

Important and crucial here is to wait with the baths until the sun warmed up the surrounding rocks. Usually, this comfortable warmed rock degree occurs at about lunchtime and invites to the relaxing half hour or more extended warming sunbathing. These unforgettable and beautiful experiences of the well-formed meandering brooks and clean rocks above Bee's Cliff. But for those hilarious adventures, it would have been even more suitable if they had occurred a month earlier and thus offered even more, engaging spontaneous bath activities.

Photographs Of the Highland Brooks

These photos of water-filled streams and cascading waterfalls are all shot just above Bees' Cliff (14) at Entoto's southern highland plateau - from early October to the beginning of November. At the time of all these active water sports photographs, it has passed about one to two months since the long rainy season ended. Despite the period given from these photo opportunities and the last rains being over a month, it is still a great asset of bath and fresh spring water flow on the higher ground of Entoto.

The different ways to these natural pools just above Bees' Cliff (14) follow those previously described from point (37). Thus, there are several very different path choices just uphill from point (38) but also becomes enriched by a more thorough, independent acquaintance with the full south-eastern to north-western eroded soil road (41) located just above points (14 - 16).

The Arrival to the High Plateau (14) - (41- 42)
The high plateau is an evident and apparent contrast to the quite steep hiking up from the sculptural river banks at the sanctuary of  Entoto Kidane Mehret (32). Behind now is Bees' Cliff's adventurous and beautiful experience (14) and the adorable viewpoint (16).  However, since gentle downhill from (41 - 42), they are very near, with Bees' Cliff (14) just to the south and the charming view (16),  now behind but in close walking contact located on the threshold below the southern outer rim of this high plateau.

Canyon hike towards the high plateau.

Initially, the path above the tributary creek (36) is quite rugged, and its location is within the map loop's (14) lower section. The course is somewhat steep but offers a relatively gentle than wild hike towards Bees' Cliff (14), and its direction uphill is along the northern hillside of the tributary gorge (36) - (14). Since the plateau's threshold is very close to the point (36) - (14), the walk upwards becomes less burdensome, especially since this route appears gentle and enticing along the upper bank of the creek (36) in a minor eastern detour before arriving on the high plateau. The hillside above the tributary creek (36) shown within the map loop (14) is the last choice of a hike from the canyon (B) - (35) - (14) to reach the high plateau (41) - (42) - see the map loop (14).

A High Plateau Trail from South-East to North-West.

Although, this ground road (41) towards the rock pools of Bees' Cliff (14) is eroded and requires some maintenance before use by cautious, conventional tourist vehicles. However, its extent is suitable for reaching these nature pools at Bees' Cliff  (14). It is, therefore, an open and beautiful road for a promenade to the rock baths or further brook passage to Entoto Natural Park (Nursery) 34.

There are two rainy seasons per year, the short rainy season from March to May and the significant rains from July to September. The highest rainfall intensity occurs in July and August (Demissew, 1988). This place may appear scary during the relatively long rainy season. The water flows are high and intertwined with rapidly sudden thunderstorms that only a powerful terrain vehicle would protect against.

While this site offers an exhilarating beauty and the regularity that the storms usually follow a bound rhythm, its experience in beautiful, cosy daily hours can be both an exciting and irresistible occurrence, providing a conscious behaviour to return in time before the next thunderstorm.

The Importance Of Drinking Water

Water must be available all year round, but most brooks dry out sometime during the year, giving high importance to bringing drinking water in rugged bottles. There are, however, a few springs within the Park area, providing water for all seasons.

Rain Season: There are two rainy seasons per year, the minor rains from March to May and the big rains from July to September. The highest rainfall intensity occurs in July and August (Demissew 1988).

Adventure History.
"Entoto's climate during the rainy season was moreover far from pleasant, for it suffered from many storms. A French traveller, Jules Borelli, states that it was a place of much lightning, thunder and fog, while his compatriot, Charles Michel, remarked that ''exposed to the wind, difficult to access, and without drinking water'' (Ibid, p.103).

Natural Rock Pool above the Dramatic Abyss of Bees' Cliff (14)
The picture shows a natural pool at the first southern rim ledge of the high plateau. The scene is reminiscent of an invitingly wild and deep rock bath. The location of this bath is just a few steps above the hidden stone chamber, which forms the northern preamble to the abyss of Bees' Cliff (14).

The scene is reminiscent of invitingly wild rock baths in nearly shocking proximity to the breathtaking view above the canyon's abyss (14). The location of these baths is just a few steps above the hidden stone chamber, which forms the northern preamble to the abyss of Bees' Cliff.

This unique rock pool at the southern rim of the high plateau shows the oddly cosy and rather deep-cut bath just a few steps above the hidden mountain vault above Bees' Cliff (14) and its abyss. On this occasion of this photo, it has just over a month since any rainfall and the rainy season.

Harmonic Currents Along the River
**Caution During Rainy Seasons

Since all streams around Entoto run up within a short distance to the highest part of the plateau, there is no risk of being surprised by far and accumulated sudden river flow from an unknown range. There is no known weakness in the deep rock pools that could constitute a magazine water mass just waiting to break through a weak point in the cliff bottom. However, no person should walk on the riverbanks of the ravines in the aftermath of heavy rain, as this poses an immediate danger to life. A mistake towards the slippery ground can be fatal despite the apparent alert about the fast water flow. This torrential force along the river banks can quickly take a person or their pet beyond rescue in a relentless power of a rushing water flow.
The plateau just above Bees' Cliff (14) is a magnificently beautiful place with a great panorama view over the stream and many characters in the landscape. When the scene turns south, the abyss Bees' Cliff (14), the ravine, is very close, where the river's further gorge meandering (35) becomes intuitively felt through the profound cooling airflow rising from the unknown abyss below the field of view.
Brooks Climate Hike & Trails History Rain season Rainfall Spring water Visit Water