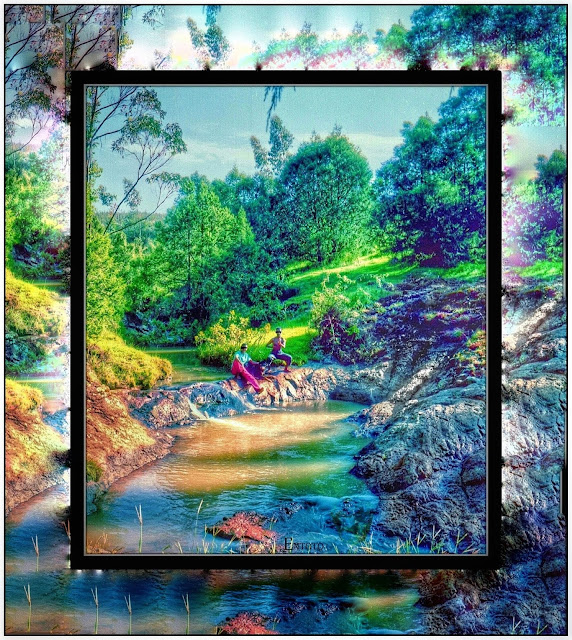 The High Plateau of Entoto Natural Park
The picture shows the mountain stream with native Juniper trees just a few steps above Bees' Cliff (14); the location is opposite the image's visual field.
A purging fresh stream runs by leaps and joy beyond the secret path of  Entoto Kidane Mehret's sacred stone walls. Beauty shines beyond hidden depths and abyss to be seen at the Bees' Cliff (14).
The Arrival on the High Plateau (41- 42)
The high plateau is an evident and apparent contrast to the gently steep hiking up from Entoto Kidane Mehret (1) with its sculptural river banks at the Sanctuary (32). Behind now is Bees' Cliff's adventurous and beautiful experience (14) and the adorable viewpoint (16). But still, they are very near, with Bees' Cliff (14) just several tens metres to the south and the adorable viewpoint (16),  now behind but in close walking contact, located on the threshold below the southern outer rim of this high plateau.

This plateau just above Bees' Cliff 14 (see the picture above) is a magnificent place with a great panorama view over the stream and many characters in the landscape. When the scene turns south, the abyss Bees' Cliff (14), the ravine, is very close, where the river's further gorge meandering (35) becomes intuitively felt through the profound cooling airflow rising from the unknown abyss below the field of view.


14. Among the Playful Hay of the Ravens
Thus, with dramatic beauty, this place attracts an exciting approach to exploring an unknown world of nature. Since prehistoric, this wonderfully excitingly secret dwelling has created scary deep rock formations in underground gaps and hidden rock chambers amid their surrounding waterfalls.


Grandiose Views Above the Veiled Twilight World (14).
In this enticing deep underworld of shadows and greenery, this treacherous luring cliff vault and abyss gives a home to pure magic twilight where Ravens reside and invite pleasant arts of flight. However, take care because the Ravens have a habit of approaching in playful jacket pinching mischief.

However, this is overall the reason for the attraction of the place. Thanks to varying and dramatic scenery, create the ideal wildlife habitats that naturally utilize this rich, three-dimensional diversity in water and rock formations.

𝐀𝐪𝐮𝐢𝐟𝐞𝐫𝐬 𝐚𝐧𝐝 𝐭𝐞𝐜𝐡𝐧𝐨𝐥𝐨𝐠𝐲
Knowing these natural aquifers and their synergies with water technologies is antiquity's highly valued historical legacy. In their context, they are a well-known concept that helps to understand that a mighty mountain massif that receives abundant and regular precipitation with chilly temperatures also provides the conditions for harbouring this water.
𝐔𝐧𝐝𝐞𝐫𝐠𝐫𝐨𝐮𝐧𝐝 𝐑𝐞𝐬𝐞𝐫𝐯𝐨𝐢𝐫𝐬
These historically and very early developed technical and geological-based methods for managing and saving enormous amounts of water that are often technically complex and aesthetically grandiose. The methods of this water technology vary significantly between different cultures and continents. Still, in the legacy of history, they are the basis of ancient civilizations' most important and original technological achievements.

A Canyon of Grandiose Beauty and Wildlife


Close Encounter With Playing Baboon Families
While this place is unique in many ways, there are also reservations about the impact people can exert on its nature. Because this site contains what is desirable for people and wildlife, the result is that a conflict of interest and living space can occur.
The Canyon (35) and Trails to the High Plateau (41- 42)
The paths up to Bees' Cliff (14) offer several options; the northern hillside of the tributary gorge (36), the southern slope of (38-39) - (15-16) and (41).

The Adventure of the Canyon

A Pleasant Easternized Route along the Tributary Gorge 36.
However, since the abyss is close and with due care; therefore, preferring a more easternized route commitment while following along the tributary gorge (36). This required caution along the path is crucial for increased safety towards the abyss and to avoid suddenly scaring wildlife that enjoys socializing around the beautiful pools - just some ten metres above the plateau threshold and the abyss of Bees' Cliff  (14). This location, including the Canyon, is shown within the map loop (14).
A Walk in the Abyss with the Secretive Company of Hyenas.
This charmingly hidden gorge (36) delivers expectations where curiosity and excitement fill the atmosphere directly from the route's start. Gentle and refreshing winds provide visitors with a fresh coolness in a welcoming breeze from the Canyon below that is well camouflaging the scary smells of civilization from reaching the hyenas in depth. This tributary gorge (36) to the Canyon is shown within the lower section of the map circle (14).

The Assistance of Path Directions (37)

The superficially lying water pipeline (37) is located on the slope above the valley [A]. This place is easily reached from below the valley [A] with comfortable passing between a couple of cottages before it continues and reaches a gentle high level on the mountain's shoulder. Just before the Italian fortification (38) - (B) appears a theatrical view and potential dangerous abyss a few metres to the left of the path.

Very near but deeply below this Bees' Cliff (14), where these two streams meet, a place of idle creative nature is created, with splendid surprises in both hidden prongs and open spaces with high slopes. The one who stays a little concealed between the tree trunks at point  (36) can quickly get very close to rumbling and relaxed hyenas. The southern slopes of the creek  (36) are pretty steep yet comfortable hiking with beautiful views down over this mysterious and lush nature with its invitingly open gorge and the two converging streams (36).

The Work Area of Many Endeavours
Entoto's High plateau appears among adorable Juniper hills and dreamlike meadows. Ultimately, this landscape of forgotten dreams reveals its southern border in Bees' Cliff's abyss (14). Here it shows very soon; the beautiful path (42) to Entoto Natural Park (Nursery) 34, where massive work has elapsed with nature restoration for many years. Ethiopia's indigenous plants and trees have provided nature with an immense robust, soil reinforcing, well-anchored root system.
A High Plateau with Gentle Terrain.
This excursion to the Nursery is a pleasant wandering with a minimum change in altitude, where it usually permits dry rock to wade over to the west side of the meandering stream. This direction passes just a little besides the natural pools above Bees' Cliff (14) and then further north through an open forest before arriving at the Nursery (34).
Entoto Natural Park (Nursery)

Adventure above the Abyss

**CAUTION - Bees' Cliff (14)
Bees' Cliff constitutes a hidden, unknown void, which can become a real danger and does not allow direct, easy proximity from either the east or the west side of the gorge's slopes. These precipitous cliff sides are so seriously too steep that all visual contacts toward the bottom of the abyss are impossible.
14. **Enchanting Lush Attractions Above the Abyss.
In all the expression of fundamental nature, a multi-dimensional, graceful beauty is nevertheless a false invitation of safety delivered. Through this deceiving natural trickery, the eastern Canyon's slope gives an impression of invitingly lush beauty but a treacherous one with a fertile green breathtaking threshold, hiding a shocking void.

CAUTION: Dramatic Distances and High Altitudes.
Besides, Entoto Kidane Meret Sanctuary (32), with its Church and Monastery, is astonishing hidden, tucked into the mountain massif's rising shoulder, dizzying perception arises very soon, and demands care for young families. This observance is evident because dramatical views display spectacularly beautiful landscapes over the location of gorges, precipices and gullies.
Demanded Harness in Contact with Abyss.
These unique impressions give a somewhat hazardous situation with confusing camera handling and keeping the feet away from the abyss. The importance of security precautions occurs quite soon together with beautiful views when moving away from a bit of piece of this cosy Entoto Kidane Mehret (1) mountain town and Sanctuary (32).

The Trees Along the Brook in the Pictures:

Juniperus procera is the native species of Entoto, and it should dominate the future Natural Park.  Entoto Natural Park 1995). This does not mean that the forest will look the same all over. When designing with nature, the high importance dominates of creating habitats (biotopes) suitable for the area's physical conditions. After analyzing soil quality and eroded parts, biodiversity, water availability and catchment, limitations due to, e.g. high altitude, etc., the area's potential for accommodating specific plant communities can be estimated. The 17km² provides unique variations in elevation, humidity, climate, and soil if the conditions specified for each spot are considered when planting and managing (Håkan Blanck and Pia Englund,

Juniperus procera
Ecology:
A valuable timber tree indigenous to Ethiopia and eastern Africa's highland forests 1,500-3,000 m. It does best in high rainfall but can survive quite dry conditions once established.
It is the largest juniper in the world. It performs well in Moist and Wet Weyna Dega and Dega agroclimatic zones (Azene Bekele-Tesemma 1993).

Entoto Park (Z) A Modern Park for Nature & People A sincere request prevailed for a family-friendly invitation to the Park's exquisite nature for a long time. Thanks to a new family and culture department with the required modern facilities, this unique nature would become within reach for families and passionate nature people. Thus, the somewhat rugged and overwhelming vast appearance of Entoto Natural Park gave the cause for developing this more comfortable department, including various activities and cultural facilities. This newly inaugurated and modern department is called Entoto Park. Several maps simplify access to entertainment or cultural facilities for visitors to Entoto Park (Z), Entoto Kidane Mehret (1), and Entoto Maryam (43) with various activities within the dramatic landscape. However, even regarding Entoto Park (Z), all these vast and new activities and facilities for one day can appear overwhelming and tiring. Although Entoto Park (Z) is more convenient and m
Read more

The Dangerous Heritage of Terror Alien and Threatening Motives Behind Evolution of Terrorism 1. It seems inevitable that Ethiopia, as an example of grandeur and deep attraction, will cause jealousy. Therefore, Ethiopia had once more to be the legendary scene for even more examples of deceived western international sources, tragically deluded by insidiously fabricated alliances with their specific plague of historical records. The probable reasons for these international deceived emotions derive from the flagrant background of a compulsively regular duped global media, tragically supporting a terror classed organization that previously forced its fabricated government on Ethiopia's population and environment. Thus, the deluded international media unintentionally delivered the challenge and stimulus for any Ethiopian to further raise Ethiopia's desire for cultural sophistication and technological progress. These previous terror govern, and naively manipulative elements against
Read more